As part of a lifestyle change we’ve made, we’ve recently moved to a more rural location, surrounding by cattle. While we’re still within a town, we now have cows off our doorstep and in our back yard! 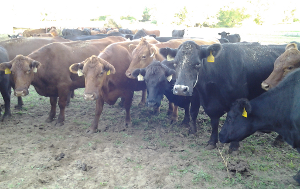 As a result, we’re getting an up close look at the “humane” raising of these animals intended for food. For the most part the animals do get to graze in pasture and live much more naturally than they would in a CAFO. But it’s not all sunshine and roses.

These cows are raised using the more “natural” methods embraced and approved by animal welfare organizations. They are considered “grass-fed”.  The treatment is Certified Humane. But it should never be considered compassionate.

While I will admit this is an improvement over veal crates and feed lot life, it’s still not enough.The animals are still treated like property, torn from their families, and have absolutely no say over their fates. There’s a reason they refer to animals as live stock.

It is beyond me how organizations that say they are dedicated to animals can promote this nonsense.  Humane meat is a myth. The best way to help farm animals is not to treat them better before killing them, but to stop eating them!